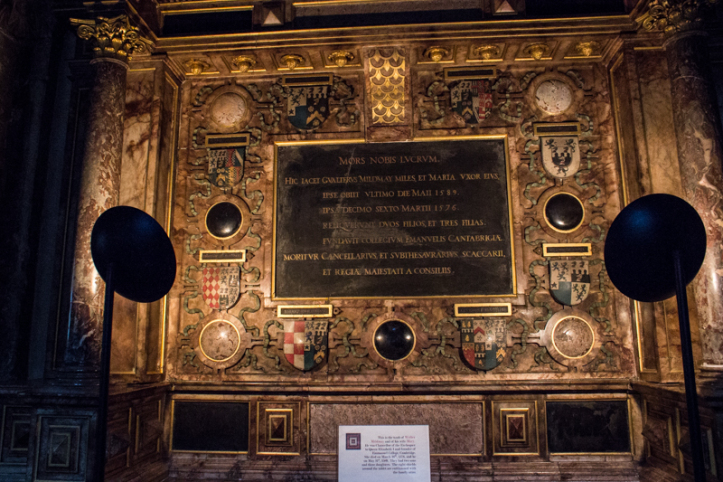 what the dead had no speech for, when living,
They can tell you, being dead …
[T.S. Eliot, Little Gidding]

Mildmay, in the dark you look ornate
but barely comprehensible, and so dead;
the tokens you’ve chosen to be remembered by
far less eloquent than the naked Smalpace bodies.
Your heavy marble out of place amongst the stone:
you intended to impose.

But now you know – if you know anything –
that evidence of the world’s approval
counts for nothing after death.
It is your soul that matters now,
not how many kings and queens you served
or colleges you founded.

And since you know, and cannot even answer back,
your boasts reveal unguessed humility.
I recognise you now: we’re kindred spirits.
Instead of shields, I’d spread my poems round a monument,
listing where they’d all appeared, the prizes won:
I’d never be content.

You meant to brag, show off, belittle me;
but wiser dead than you ever were alive,
we’ve had a conversation. You’ve reminded me
how trivial is the heaping up of honours,
of how success slips through our fingers
like the dust we must become.

[First published in Awaiting an Epiphany, 1997]