The wonderful concert I went to last week at The Hall, St Botolph without Bishopsgate, as part of the Song in the City series, reminded me of how significant Ivor Gurney is in the pantheon of 20th-century English composers.  His songs are gems, in the tradition of earlier composers such as John Dowland – succinct, instinct with emotion, by turns melancholy and energetic, and utterly captivating.  Often he set his own, or his friends’, poems to music.  Several recordings of some of his work have been made in recent years; I would particularly recommend Paul Agnew’s recording of a selection of his songs on the Hyperion label, Gurney: Severn Meadows and Other Songs 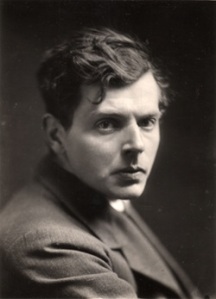 Gurney’s life was a tragic one.  Always a rather unstable, though brilliant, character, he was badly affected by the First World War in which he served as a private (writing many of his songs and poems in the trenches).  He was gassed, and his mental problems were exacerbated by his war-time experiences.  After the War, his family became increasingly unable to cope with him and had him committed to an asylum.  He remained incarcerated for the rest of his life (he died in 1939).  For more about Gurney, I would recommend Michael Hurd’s biography: The Ordeal of Ivor Gurney

. Ivor is buried in the churchyard at Twigworth, a couple of miles outside Gloucester.  In a neighbouring grave is Herbert Howells’ son Michael, who died aged only nine, and after whom Howells’ well-known tune to the hymn “All my hope on God is founded” is named. Several years ago, after visiting Twigworth, I wrote a poem about Ivor Gurney.  I will put it in my next post.