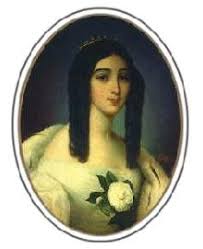 On this day in 1847 the funeral of the Parisian courtesan Marie Duplessis took place at the church of the Madeleine, a few hundred yards from Marie’s apartment. The mourners included Tony, the famous supplier of horses to elegant Paris, as well as several prostitutes who had been helped by Marie in the past. The funeral expenses came to 1,354 francs, and it is possible that some of Marie’s erstwhile lovers clubbed together to cover them. Her obsequies may also have benefited from the flowers and decorations provided for a grander ceremony, the other funerals taking place that day at the Madeleine being for the Countess d’Augier, the Count d’Escherny and an old man called Monsieur Ducamp de Bussy, who lived in the same building as Marie. The coffin was followed from the Madeleine to the cemetery of Montmartre by Edouard de Perrégaux, who appeared overcome with remorse.

Marie, who became the prototype of the virtuous courtesan through her portrayal as Marguerite Gautier in the novel by Alexandre Dumas fils, La Dame aux camélias, was only 23 years old at the time of her death. She had been born Alphonsine Plessis on 15 January 1824 in the village of Saint-Germain-de-Clarfeuille near Nonant in Lower Normandy, the younger daughter of a travelling pedlar called Marin Plessis and his wife Marie. In her early teens, her father placed her as an apprentice to a blanchisseuse, which can be loosely translated as ‘laundress’. Such an apprenticeship involved long hours of hard and repetitive physical labour. Emile Zola gave a detailed description of a laundress’s establishment in his novel L’Assommoir, from which it is possible to reconstruct an idea of Alphonsine’s working life at this time. First, piles of dirty linen would be sorted and washed, the actual washing sometimes being done at a communal washroom by a washerwoman, a lower level of worker than the blanchisseuse. Much of the work of a blanchisseuse consisted of ironing, which would be done at a large table covered with a heavy blanket, itself covered with calico. Several irons were heated on the large cast-iron stove, and it would be the job of the apprentice to keep this stove filled – always being careful not to overfill it – with coke. The room where the blanchisseuses worked would also be full of clothes hung up on wires to dry. On the floor there would be an earthenware pan, containing starch into which the linen would be dipped before being ironed. The blanchisseuse herself and her older employees would be busy ironing intricate objects such as caps, shirt-front, petticoats and embroidered drawers, while the apprentice could be put to work on the plain items, the stockings and handkerchiefs. The ironing would be done standing up around the table, a flat brick alongside each worker on which to place the hot iron. Work could go on until late at night, particularly on Saturdays, so that the customers would have their clean clothes to wear on Sunday.

Such was Alphonsine’s life when she was aged about thirteen to fourteen. Then one Sunday, her father, who had remained in touch with her, took her to visit an elderly acquaintance of his, a bachelor in his sixties or seventies by the name of Plantier. But more than taking her to visit, Marin Plessis left Alphonsine with Plantier; possibly he even sold her to him …

The story of how the young apprentice Alphonsine Plessis became the famous courtesan Marie Duplessis, including how she came to marry Count Edouard de Perrégaux, who followed her coffin to the grave, can be found in my book Grandes Horizontales.